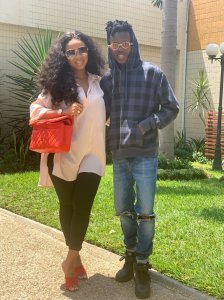 Recently, broadcast journalist Serwaa Amihere received a lot of backlash from the fans of Strongman after asking Strongman Burner on GHOneTV if he would apologize to Fella Makafui for involving her in the beef that he had with Medikal. Strongman said that Medikal was the one who first involved his girlfriend in the beef. If Medikal apologizes then he would do the same.