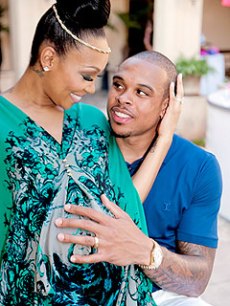 According to People, Monica Brown gave birth to a bouncing baby girl on tuesday, 3 september in Atlanta. It’s the couple’s first child together.Read what PEOPLE said:

Following a failed epidural, a team of anesthesiologists administered a second dose after “several hours of labor.”

On hand for Laiyah’s debut were big brothers Rodney, 8, and Romelo, 5 ½ — Monica’s sons from a previous relationship. “They were there when their little sister’s entrance into the world took place,” the rep adds.

The family was released from the hospital on Thursday and is now settling in at home.

On Friday, the new dad posted a picture on Instagram of him sleeping soundly while cradling his newborn daughter. “I THANK GOD for her! JOY has been restored in my LIFE!” he writes.

After announcing there was a baby on the way in May, the proud parents-to-be celebrated their baby girl’s pending arrival with a pink carousel-themed shower in August.