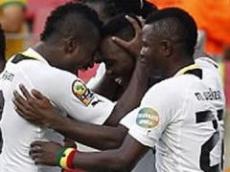 Ghana will play the crucial 2014 World Cup playoff first leg match against Egypt on Tuesday, October 15 at the Baba Yara Stadium in Kumasi.

The decision to switch the date according to Sikka FM was made by top Ghana FA officials on Friday morning, hours before FIFA’s deadline for confirmation of dates and venues for the playoffs.

The reasons for the change of the earlier proposed date of the match – October 13 – are yet to be made official by the Ghana FA.

It is however believed the decision was inspired by a move to give coach Akwasi Appiah more time to work with his full squad before the crunch game.

With many of the Black Stars players plying their trade in Europe, it is feared coach Appiah might not have enough time with his team before the match on the originally fixed date of October 13.

Egypt already have a head start over the Black Stars as they will be moving to camp next week for the crucial match with most of their key players home-based.

FIFA had given all teams competing in the playoffs to confirm dates and venues for their home matches by close of Friday.

The teams in the playoffs were given the option to choose any date within a range of October 11-15.

The Ghana FA have now decided to pick the final date to give the Black Stars more preparation time for the match.

The Ghana FA had earlier sent correspondence to FIFA that the game will be played on October 13 in Kumasi.

The association will now write to FIFA to withdraw the earlier proposed date but will maintain the match venue.

The game will now be played on a Tuesday – a working day in Ghana – against the Pharoahs.

This is probably the first time in Ghanaian football history a game if this huge magnitude is being played on a Tuesday.

The Black Stars are however no strangers of playing on a working day.

Ghana beat Zambia in the last game of the preliminary World Cup qualifying group fixture on a Friday – another working day in Ghana.

The decision was also helped by the fact there is an assured massive support for the Black Stars especially when playing in Kumasi.

A massive crowd is again expected for the crucial match against Egypt on Tuesday, October 15.