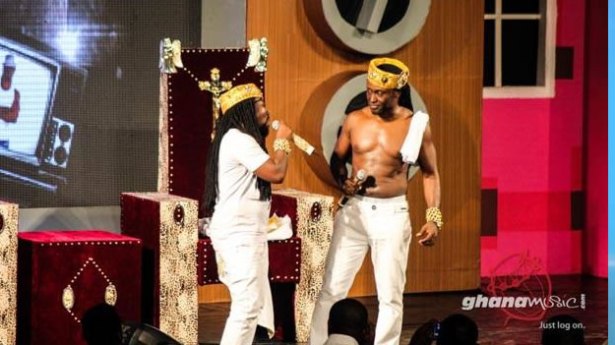 According to GhanaMusic.com, the ‘Back In The Day’ concert was a success! I wish I was there though. In my opinion, such events should be organised often. A lot of Hipife artists performed such as T-blaze with the hit single ‘Wo sisi y3 wo ya’, Reggie Rockstone and Obrafour. I still love Hiplife music.T-blaze asked for a minute’s silence in honour of the late Ronnie Coaches of Buk Bak who died last month.

Read here some of the things that GhanaMusic.com reported:

Hiplife bigwigs, Obrafour and Reggie Rockstone proved they were the undisputed  authorities in the genre at the second edition of the Back In the Day concert held last Friday at the Accra International Conference Centre (AICC)

Their coming onto the  stage was splendid!

The auditorium  was dark for about three minutes  and people  wondered what was going to happen.

Just as the lights came back on, the audience saw the two men dressed in all- white with crowns on their heads, seated on what looked like thrones.

With applause from the audience, the two wasted no time in delivering what was expected of them.

Obrafour performed tunes like, Yaanom, Twe Wo Ho, Heavy, Asem Sebe, Who Born You By Mistake, and Oye Ohene (remix).

Rockstone also thrilled everyone around with Plan Ben, Keep Your  Eyes On The Road, Different You, Different Me and  Ya Bounce Wo Visa.

Reggie and Obrafour invited Raquel and Efya on stage who backed them with their silky voices.

For the one hour that both artistes were on stage,  the audience danced and sang along with them.

View more pictures here: Back In The Day Concert 2013.

Organised by Empire Entertainment, the show started  around 10.00pm with T-Blaze.  He sang songs like Feeling No Ye Deep, Secretary and  Wo Sisi Yewo Ya.

Hiplife duo, TH4Kwages came on  after T- Blaze. They spent about 10 minutes on stage and  were able to move the audience with songs like Nana Esi  and Meye Aware.

As Nii Ayi Tagoe of Joy FM, emcee and deejay on the night played good old  Hiphop, R&B and Hiplife stuff from the 1990s,  a  group called Short Clan appeared from nowhere  onto  the stage and did their own thing. Though their performance looked good, the audience did not respond much  to them.

After a short break and during which time  the audience were shown still pictures of celebrities that had passed on, the headline act Naughty By Nature finally arrived on stage at about 1:30 am.

Regarded as one of the world’s best Hiphop groups of all time, Naughty by Nature did not disappoint  the fans.

Performing songs like O.P.P., Uptown’, Dirt, Craziest, Everything, Jamboree, Feels Good, and Feel Me Flow for an hour, the group was impressive on the night.

Though, the show had a nice stage setting and good quality sound, there were a lot of empty seats.

#YearofReturn #BeyondtheReturn
In an interview with Kofi Adomah Nwanwani, OGB Music's new artiste Cryme Officer was asked what he did when he saw the schnapp and eggs during the time he signed the contract. He replied that he is a Christian and didn't have any fear when he saw them. Moreover, he didn't ask why they were there. #ghanatrends #ghanatrending #kofitv #Ghana
New Year Resolution is the new single by @neroxgh ft. @articlewani which will be dropped at 12am on 1 January, 2020. Start the new year afresh! Try and let go of bad habits! Set an example for people. Forget all the obstacles and bitterness you experienced in 2019. Believe that 2020 will be a better year for you. Let go of negative thinking! Enter the new year full of happiness, joy, more success and breakthroughs. Pray without ceasing! There is nothing impossible for God to do in your life if you only believe. Proclaim positive declarations all the time.
New single by @neroxgh ft. @articlewani will be released at 12am #Ghana time on 1 January, 2020
%d bloggers like this: