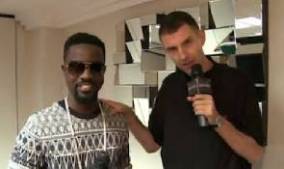 He is a top DJ on prime time British radio living in London, and he is headed to Accra this Xmas season to headline a crack list of DJs and UK acts appearing at this year’s ‘Ghana Rocks’ Concert; GHOne TV’s annual urban rave, alongside a power-packed line up of top GH and Naija showstoppers who will rule the stage come Friday, December 27, 2013 at the Accra International Conference Centre.

Tim Westwood, credited with helping to bring African music to mainstream British urban scene is the most recognized urban DJ in the UK and beyond.It will be recalled that he recently hosted Ghana’s own Sarkodie for the second time in his London studios during his Crib Sessions show on BBC Radio 1Xtra, where the Obidiponbidi did a super fantastic freestyle delivery.

This year’s Ghana Rocks Concert itself has a super line up of Nigerian, UK and Ghanaian artistes, which list, though, yet to be revealed, promises to be a party-of-a-lifetime.

It will be an Afrobeats edition, and will seal the annual event as Ghana’s official hippest end-of-year rave. It has over the years witnessed amazing performances from both home-based and visiting international acts.

A multiple MOBO awards recipient, Tim Westwood is a celebrity DJ par excellence, and is regarded as the most influential figure in hip hop in Europe, and a promoter of the Afrobeats genre on the UK scene.

Last year’s concert recorded a phenomenal attendance with over 4000+ youthful music lovers thronging into the Dome for the jam, and thoroughly enjoying the thumping and pulsating tunes that was delivered by over 2000watts of sound power.

Closure of the Dome, our biggest indoor event venue, means, however, that the event will be held inside the auditorium of the Conference Centre, and will be as electrifying as has been over the years.

In its 6th year, the 2013 edition of Ghana Rocks is brought to by Vodafone and powered by Charterhouse.