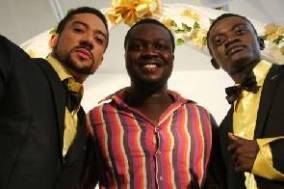 The movie titled Could This Be Love also starred Nana Ama McBrown, Gloria Sarfo, Doris Sackitey and Fred Amugi. It made headlines recently when word went round that Lil Win

and Majid acted together in a movie.According to Eddie, it was a great experience: “Acting is quite flexible. With acting, you are dealing with a character as in the one you are playing and relating to others. When you are able to get the character right, everything else becomes simple for you.

But with directing, you are dealing with every actor in the movie be it a major character or an extra. You are also dealing with the technicalities, calling for shots and making sure you execute every scene correctly. I bet you directing isn’t children work (laughs). Why do we watch movies with great actors in it and yet still say it’s not a good movie? If you ask me, directing is far difficult than acting,” he explained.

Eddie said he found it pretty easy directing Lil Win, though there were speculations that he had problems directing him because of claims that ‘local Twi actors don’t use scripts when acting’.

“Well, they do act with script. But of course it’s written in English so they summarise it and boom they are on. Initially I wanted him to go line by line but I realized it was getting difficult, so I explained to him the salient points I wanted. I must say Lil Win

is very creative. He understands the job. All he needs is a good explanation of the scene and he will execute it for you. Initially I didn’t understand his style but after a couple of scenes it was easy directing him,” Eddie told NEWS-ONE.

The new movie will be premiering at the Miklin Hotel in Kumasi on February 1, 2014 and on February 2 at Kwame Nkrumah University of Science & Technology (KNUST).