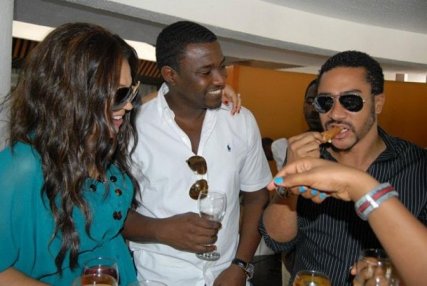 Actor, John Dumelo, has revealed he never saw his colleague and friend Nadia Buari pregnant neither has he set eyes on her set of twins.Dumelo who was speaking to Kafui Dey on Morning Starr on Starr 103.5FM Wednesday said he feels the actress has boundaries that should be respected.The Affable actress gave birth to twins in Atlanta, USA in February according to her father Sidiku Buari.News of her delivery came as a surprise to many, given she was not publicly seen pregnant in the months leading up to the delivery of the twins.Dumelo who is known to be very close to Nadia said he, like many of her colleagues and friends in the industry, has not seen or heard the twins.“No. I don’t know where she take them hide. Nobody has. I don’t know anything about it,” he remarked in pidgin .He added that he never saw his Ghallywood colleague pregnant.“I saw her in December and I didn’t look to see whether she was pregnant or not.”Nadia Buari was engaged to Nigerian actor Jim Iyke a few months before the news of her delivery broke.Dumelo who confirmed he was recently with Jim Iyke in Canada said he did not dare ask him about the twins either.“Some things are just a bit personal. I can’t go asking him, ‘charey Jim Iyke, the twins how’? He go slap me. He go fit punch me ‘sef’,” he noted. Source: Ghana/SatrrFMonline.com/103.5FM