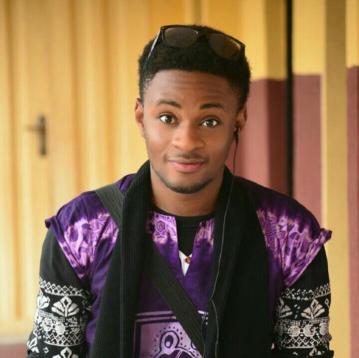 Ovie Dyksen Tebu is a 21-year-old musician and producer who is based in Nigeria. The multi-talented young man from Delta State plays five instruments: keyboard, drums, saxophone, guitar and violin. He’s a self-taught keyboardist and producer. Moreover, he can play the keyboard in different ways such as playing it while it’s behind him and even use his toes. Also, he can play it while being blindfolded.

Phyllis Ntim: At what age did you start playing the keyboard?
Ovie Dyksen Tebu: At the age of 7.

Phyllis Ntim: Who inspired you to become to become a producer?
Ovie Dyksen Tebu: Don Jazzy. He’s just too good. I thought: “If he can be that good, I can be better”.

Phyllis Ntim: Do you have any other role models?
Ovie Dyksen Tebu: For production: Don Jazzy, Kanye West and Timbaland. Just these three.

Phyllis Ntim: What really baffles me is that you can even play the keyboard while it’s behind you and in different positions. How were you able to master those crafts?
Ovie Dyksen Tebu: It all started when I participated in a talent show at a school that I used to attend. There was also another pianist there. I had to sit down and think of what I could do to wow the crowd because he was playing like me and there was no difference. So I had to find my own X-factor. I started turning the keyboard in different ways. I practiced at least twice. It doesn’t take me long to master it. The first one I did was playing the keyboard which was positioned in a vertical way while I was blindfolded. I’m still discovering different ways to play the keyboard.

Phyllis Ntim: I’ve watched a number of videos of you producing beats by just using a laptop without a keyboard. How does that work?
Ovie Dyksen Tebu: Most of the producers don’t have basic knowledge of the keyboard but I do. For e.g., if it takes them ten minutes to get what they want, I can do that in less than ten seconds. Once I start, I already know what I’m doing and how long it will take me to do it.

Phyllis Ntim: So you already know in the software program where the C, E and the D sharp are?
Ovie Dyksen Tebu: Yes. The software program has its own keyboard inside. So I know where every key is. I wouldn’t need an external keyboard to make the beats then.

Phyllis Ntim: You rap as well. When did you start rapping?
Ovie Dyksen Tebu: I’ve always rapped since I was a little kid. Since I could start talking, I’ve always tried to rhyme. I don’t rap everyday.

Phyllis Ntim: Are there other instruments you play apart from the keyboard and the drums?
Ovie Dyksen Tebu: Yes. I play five instruments: piano, drums, saxophone, guitar and the violin. I don’t play the saxophone often because I have asthma. Playing it requires a lot of  breath. I have little knowledge of the violin. My violin skills are not as good as the other instruments that I play.

Phyllis Ntim: I used to play the violin.
Ovie Dyksen Tebu: You’re probably better than I am.

Phyllis Ntim: When did you start producing beats?
Ovie Dyksen Tebu: Six years ago; in 2010.

Phyllis Ntim: Did you go to music school to learn how to play the keyboard?
Ovie Dyksen Tebu: I’m a self-taught keyboardist. When babies come out of their mother’s womb, they come out with clenched fists. I came out from my mother’s womb with spread fingers. I also draw. I used to be into art before I played the piano. There was no one to play the piano at my church when I started playing the keyboard. I pressed on a few keys and I learned how to play London Bridge, Twinkle Twinkle Little Star. I could play the basics at my church in three weeks. I play by ear. I used to listen to a lot of jazz and classical music. Whichever song I heard, I tried to recreate it. If I didn’t get it the first or second time, I would get it eventually. That’s how I learned a lot. Playing classical music is so complex for a lot of people.

Phyllis Ntim: How has your journey into music production been so far?
Ovie Dyksen Tebu: It started really bad. I couldn’t quite get it in the beginning. I would make something and it would sound so awesome to my ears and I was listening to someone else’s beat and I thought: “Wow. I just made rubbish”. Right now, it’s pretty good. I do use Don Jazzy’s beats to practice and attempt to remake every beat he makes. Any song I like, I try to make the beat as fast as I can. As a musician, I play by ear. It’s actually a gift that a lot of musicians don’t have. Let’s say, it took Don Jazzy to make the beat for the song ‘Romantic’. I would have been able to make the beat in 45 minutes.

Phyllis Ntim: What message do you have for people that want to pursue a career as a producer?
Ovie Dyksen Tebu: Well, I would tell them that it’s not easy in the beginning but they shouldn’t stop. You would get discouraged. You will meet a lot op people that are better than you and if you let that discourage you, you might lose out on your dream for no apparent reason. My advice to them is not to stop.

Phyllis Ntim: What are your plans concerning music production this year?
Ovie Dyksen Tebu: I plan to make a lot of music. I hope to improve myself this year because I can’t keep on doing the same thing everyday, even if I play the keyboard while it’s behind me or if my eyes are closed. After some time, it will get boring.

Phyllis Ntim: Are there famous artistes that you have worked with before?
Ovie Dyksen Tebu: No. I’m yet to. I’m even working with a popular artist at the moment.

Phyllis Ntim: Have you already met the person?
Ovie Dyksen Tebu: I have but I’m not going to disclose who it is. I want it to be a surprise.

Phyllis Ntim: Ok. I’m anxious to know who it is. Do you plan on recording rap songs?
Ovie Dyksen Tebu: Yes but not only that. I sing too. I’m planning to release a mixtape, maybe later this year. It would have a producer track just like how David Guetta does it and even one track by me. I would either sing or rap. Moreover, there will be two features of good artistes that I know. Five songs will be in the EP.

Below are some videos of Ovie:
https://www.instagram.com/p/5ebKzLrmyZ/?taken-by=ovistebrown