‘Who killed Uncle Attah?’ is an intriguing Ghanaian movie by Kaakyire Kwame Appiah of Kaakyire Films Production in conjunction with Nashmey Pictures. It was directed by renowned movie director Jackson K. Bentum.

When Uncle Attah’s father died, the family from his late father’s side rejected his mother, siblings and him because his mother is a Fante. They then travelled.

Uncle Attah became a headmaster at the village where he was living in. He was later elected as Assemblyman. Through his hardwork, he later became the Municipal Chief Executive. 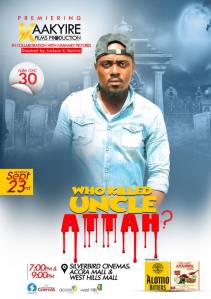 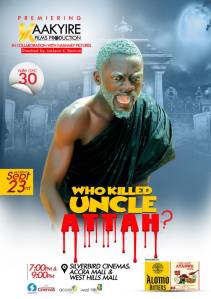 Some of the stars that played a role in the movie are Kwadwo Nkansah Lilwin, Akrobeto, Too Sweet Annan, Kaakyire Kwame Appiah and Christiana Awuni.

The movie will be premiered on Saturday 23 September at 7pm & 9pm at Silverbird Cinemas, Accra Mall and West Hills Mall.