The epic failure of teachers to ace the “primary 4” aptitude test set by the Kaduna state government  should not be viewed in isolation.

It is indeed a ripple effect of the level of decadence the Nigerian educational system has degraded to over time.

That’s a whooping 66% of professionals to whom we entrusted the future of Kaduna!.

As mind boggling as this is, it is however nothing g compared to the bigger issue facing our most important economic sector in Nigeria.

Recall that the percentage of funds allocated to education in the recently passed 2018 budget was a meagre 7.04% as against the 26% of about N8 trillion being demanded by professionals in the sector.

This is a very political issue but cannot be completely liable for the poor results garnered in Kaduna.

As a fact, Kaduna, which is one of the 13 Northern States in Nigeria enjoys the World Bank Educational Intervention Initiative should boast of more funds available for education of children and youths alike. So what is the real problem?

Governor El Rufai  was quick to inform the general public that teaching appointments had been politicised in the past as they were given based on other factors except merit. He was also swift to offer the “perceived solution” of recruiting 25,000 new teachers after they must have satisfied requirements, in his words “to restore dignity and quality education”.

What then is quality education and how has it been stifled in our schools on the past?

This issue is not peculiar to Kaduna, it is a general socio-economic problem that has done a lot of harm  in our polity.

Citizens have been subjected to this decaying educational system which in turn has bred corrupt politicians , government officials and institution leaders who didn’t learn anything about character nation building and service to humanity.

This archaic educational system has brought about complacent teachers and lecturers who feel no need to improve and remain relevant in today’s world of science and technology. Lack of training and retraining of professionals who are even willing to go the extra mile and above all, lack of good remuneration.

In a fast growing World where education is constantly evolving, technologies are being created and short lived, methods are being reviewed and modified, theories are being questioned, it is pertinent to understand that education has evolved from an environment of teachers teaching and students learning but be viewed as an open end process where creativity, intuition and curiosity are discovered and nurtured.

These attributes are almost non-existent in our public schools and where exhibited by some children, may be punishable thereby stifling the growth of such traits.

Students do not have the ‘audacity’ to challenge teachers academically or in some cases vocationally which in turn make teachers complacent about research and further learning. 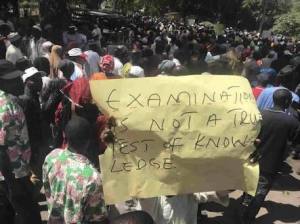 If these IQ tests were taken across Nigeria, I guarantee a fairer result but does that ultimately translate to better education for the younger generation?

The answer is an emphatic NO.

Martin Luther, in his famous quote said “Intelligence plus character is the true goal of education”.

It is critical to the sustainability of the Nation to find innovative solutions to the root cause rather than the symptoms of this issue to prevent us from collapse.