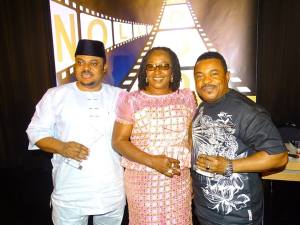 Nollywood Film Festival Germany (NFFG), is a viable platform designed for Nollywood (Nigerian/African) filmmakers to showcase their movies to Europeans and Nollywood fans in the Diaspora – (a confirmed educational tool of learning African culture by African children in the Diaspora). Its conception was in 2014.

NEGA (Nollywood Europe Golden Awards) is designed to honour Nollywood stakeholders, stars, comedians, musicians (both in Africa and in the Diaspora) which has also been expanded to recognize the artistic bias of outstanding politicians and business men and women both in Africa and beyond but whose actions in the area of culture and tourism sector, have directly or indirectly impacted upon Africans and other continent outside the scope of Africa countries and the Nigeria/Africa film industry in particular, thereby shaping what it has grown to become today. Its first edition was in 2012.

Ehizoya Golden Entertainment E.V. has been organizing the events in alliance with Hessen State Ministry of Arts and Culture – (Städt Frankfurt Kulturamt), Frankfurt FilmForum Höchst – Cinema, The Ministry of Multicultural Affairs (Amt für Multikulturelle Angelegenheiten – AMKA), Nigeria Embassy – Berlin, Germany, the Consulate General of the Federal Republic of Nigeria – Frankfurt, Germany and of course, the Nigeria Community Frankfurt Am Main e.V among others.

Criteria
Unless a special waiver is granted, films must comply with the following conditions in order to be selected:

Subtitles
The Blu-ray DVD or DCP must be subtitled in English if the original version of the film is not in English.

Conditions
Only Nollywood films that meet the following conditions may be chosen for invitation to the official screening:
• Films that have been produced during the twenty four months preceding the festival;
• Films distribution is limited to its country of origin;
• Films that have not been shown on the internet and TV.

Registration deadline
The deadline for registration is 30 June,2020. (By this date, the registration form below must have been filled out and validated). One of the accepted formats for NFFG films submitted for selection must be received by the festival not later than 31 July, 2020.

Film selected
Those whose films pass the quality assessment test and make the final list will be invited to the screening of their films at the NOLLYWOOD FILM FESTIVAL GERMANY 2020 with world press in attendance. You will be contacted by the NFFG department before the official press conference, which will take place toward the end of July 2020. You must supply us either a DCP (Digital Cinema Package) with a JPEG 2000 file or a 35mm print, HDCAM / HDCAM-SR, Beta SP (Pal) or Digital Beta (Pal), Blu-ray Disc + 3 standards DVD or online link. The Film Department will give you all the necessary information on time.

Shipping
The print is admitted into Germany under the customs control of temporary admittance.
All transportation costs, as well as the shipping agent’s fee and insurance are entirely borne by the producer or the sender. It is recommended to contact the shipping agent directly before dispatching the film, in order to enquire about pricing and to ensure that the whole operation runs smoothly.

Subtitling
The Screening Committee will accept to screen a film:
• WITHOUT subtitles IF the original language is English
• WITH other languages but subtitles in English.

Note
It is possible to present a working copy of the film but the submission of a final copy must not exceed the deadline.