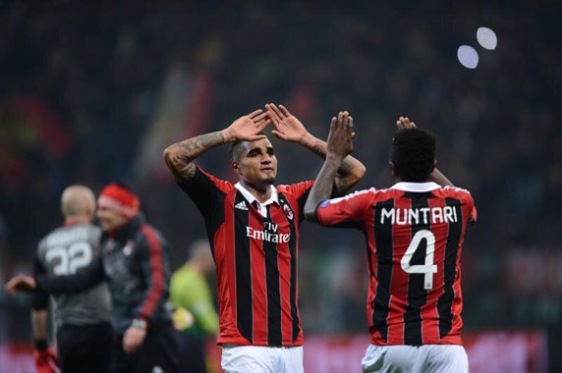 Black Stars midfielders Sulley Muntari and Kevin-Prince Boateng (KPB) have taken giant steps towards their return to the national team after the two AC Milan players sent separate letters to the Ghana Football Association (GFA) yesterday to apologise for a spat with Coach Kwasi Appiah and to confirm a comeback respectively.

Yesterday, the FA confirmed it had accepted Muntari’s letter of apology over a dressing room incident after the Ghana-Lesotho World Cup qualifier in Maseru at which an angry Muntari verbally attacked Coach Appiah over his substitution in the match. Subsequently, Coach Appiah said Muntari’s return to the national team was contingent on him rendering an unqualified apology to the technical handlers and his teammates for the incident.

Muntari’s terse letter to the FA stated: “I write this letter to render my sincere apologies to the management, technical team and the entire players of the Black Stars for my after the Lesotho/Ghana match which was played in Maseru on Sunday, 17th June 2013.

“I wish to state that this unfortunate incident will not happen again.”

In accepting the apology by Italy-based Muntari, Emmanuel Gyimah, General Secretary of the GFA, stated that the association looked forward to a harmonious working relationship with the player “to ensure the continuous progress of our beloved national team of Ghana, the Black Stars”.

KPB’s long-awaited return was given a shot in the arm after he officially wrote to the GFA yesterday announcing his return.

His brief letter stated: “I write to inform the Ghana Football Association that after a few consultations, I have decided to change my decision and confirm my availability to play for the Black Stars whenever I am needed.”

Even though GFA president Kwesi Nyantakyi had hinted two months ago of the players decision to return, following behind-the-scenes negotiations, it was only yesterday that the German-born Ghanaian international formally notified the football controlling body in writing.

Expectedly, the GFA welcomed KPB’s comeback, stating that his decision to return for Ghana “will surely re-energise the Black Stars for our future challenges.”

Mr Nyantakyi had unequivocably stated that all players, including the Ayew brothers — Andre and Jordan — who had withdrawn their services from the national team must officially notify the FA in writing before being considered for future call-ups.

At the time of going to press, the GFA said it had not received any such letter from the Olympique Marseille duo even though the FA’s Director of Communications, Ibrahim Sannie Daara, told the Graphic Sports he had been told the two players — who withdrew their services from the national team in February — had hinted they would send the letter before the close of work yesterday.