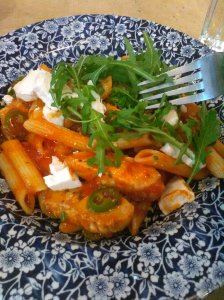 I went to Garfunkel’s Restaurant at Gatwick Airport on Monday 9 May, 2017. I travelled back to Holland on that same day. I admit that the service, which was rendered to me, was superb.

As I was standing, lookin at the menu board, a host greeted me. I wasn’t sure whether I would want to order food from that restaurant. After I made up my mind about what I wanted to order, I approached the host. He walked with me to show me where I could sit. Afterward, a waiter approached me and asked me what I wanted to eat. I ordered Penne Arrabiata with spicy chicken. Then he asked me if I wanted a drink and I said ‘No’. A few minutes later, he came with a glass of water and put it on the table. I was so astonished. I didn’t even order water and he was so kind to give it to me.

I would recommend you to go to Garfunkel’s Restaurant if you are travelling from Gatwick Airport to your destination.