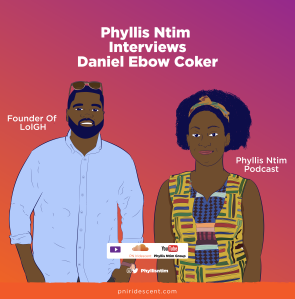 I interviewed Daniel Ebow Coker, founder of popular Ghana-based animation studio LolGH. The co-founder goes by the name of Wallen Acquah. Daniel is a self-taught animator who started his journey in arts when he attended Chapel Hill School. He studied Business Administration in Ashesi University and graduated in 2009.

LolGh was established in July 2011 and incorporates comics into its animations.

During the interview, some of the things Daniel Ebow Coker talked about were how he started his journey in arts, how the name LolGH came into existence, the struggles the team initially faced in the company and the collaboration with UK-based actor Tolulope Ogunmefun, a.k.a. Dontjealousme. LolGH will be releasing episodes of their new mini-serie titled ‘Can you imagine with Dontjealousme’, on a monthly basis. The pilot episode was released on Instagram on June 28.